Twenty years ago, Slovenian-Americans rallied together to create United Americans for Slovenia (UAS) to appeal to President George Bush and government officials to recognize Slovenia as an independent, democratic nation. For the first time since World War II, Slovenians across the United States joined to assist the homeland.

For the next nine months, leaders of Slovenian-American organizations, representing 659 lodges, societies, parishes and cultural centers across the country, met regularly as the United Americans for Slovenia to plan communications strategies and events to call attention to Slovenia's independence. 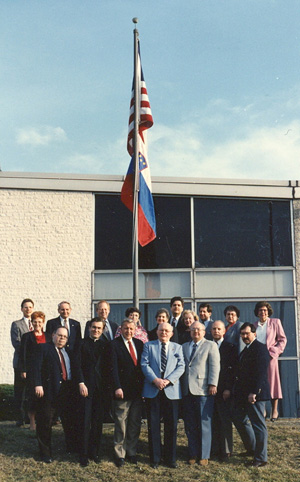 The UAS printed petitions and 50,000 postcards addressed to President Bush to request his recognition of Slovenia. Two of the most effective UAS strategies were phone-ins. On October 7, 1991, and February 12, 1992, thousands called the White House to demand recognition of Slovenia. The UAS also placed an open letter to President Bush in the Washington Post.

Government leaders, such as Ohio Senator John Glenn and Ohio Congressman Dennis Eckart, met with the UAS to discuss U. S. recognition. Visiting officials from the new government of Slovenia, including Ernest Petrič, Dimitrij Rupel, Janez Dular and Zoran Thaler acknowledged the efforts of the UAS and thanked the representatives of the group's member organizations.

On April 7, 1992, President Bush recognized Slovenia as an independent nation. The United Americans for Slovenia called a press conference to raise the flags of the United States and Slovenia.

The UAS began a new campaign for U. S. acceptance of Slovenia as a member-nation of NATO. Thousands of postcards were sent to President Bill Clinton and a call-in marathon tied up White House phone lines. UAS representatives were invited to the White House to discuss the U. S. stand on Slovenia in NATO.

With Slovenia secure in its independence and international recognition, the United Americans for Slovenia declared their mission accomplished in 2006.

July 5
Matjaž Jančar is the first Yugoslav diplomat to declare allegiance to Slovenia and becomes the first representative to the United States from the new nation. Without accreditation, he must soon return to Slovenia.

August
The UAS continues mailings to U. S. officials and monitors recognition efforts in Washington and Ljubljana. Similar overseas organizations are in contact with the UAS. American and Slovenian community leaders meet with the UAS. The American Home [Ameriška domovina] and Slovenian-American fraternal publications promote UAS recognition efforts nationally to members and subscribers.

August 3
A radio marathon, hosted by Tony Petkovsek and the American Slovene Radio Club from his studio at the Kollander Travel offices, generates 600 donations to fund UAS actions. The four-hour broadcast on Ohio station WELW receives calls from around the country, London and Ljubljana.

September 13
Each day through October 8, the UAS sends petitions with 500 names to the White House asking President Bush's acceptance of Slovenia as a democratic nation.

November
UAS members monitor resolutions being drafted in Congress for U. S. recognition of Slovenia.

November 2
Dr. Ernest Petrič and Janez Dular of the Slovenian Foreign Ministry meet with the United Americans for Slovenia. Both express Slovenia's gratitude for the recognition efforts by Americans. Slovenian newspapers, television and radio report on UAS activities and efforts.

December
Editors of Slovenian-American fraternal society newspapers follow the lead by the UAS and step up White House contact efforts by their members.

December 17
The UAS publishes an advertisement on the Federal Page of the Washington Post newspaper appealing to President Bush and Congress to recognize Slovenia. Dr. Petrič and UAS Chairman Edmund Turk receive many calls and letters of support.

March
The UAS tracks rumors of impending U. S. recognition.

April 7
President Bush recognizes Slovenia as an independent, democratic nation and lifts sanctions. Slovenia now can be considered for membership in the United States and World Bank. The UAS holds a press conference with Zoran Thaler visiting from the Slovenian Foreign Ministry. UAS representatives raise the flags of the United States and Slovenia in front of the AMLA building.

April 10
The UAS hosts a celebration at Cleveland's Slovenian National Home with guest speakers, including Ohio Governor George Voinovich. More than 100 singers from ten local Slovenian choruses debuted the Zdravljica, the national anthem of Slovenia, for the 800-plus audience.

April 21
The UAS recognizes Dole, Eckart and Glenn with plaques at a Washington reception in honor of Slovenia.

August 25
The United States opens an embassy in Ljubljana.

September 7
The UAS delivers a U.S.-made flag of Slovenia to President Bush in gratitude for his full acceptance of Slovenia as an independent, democratic nation.